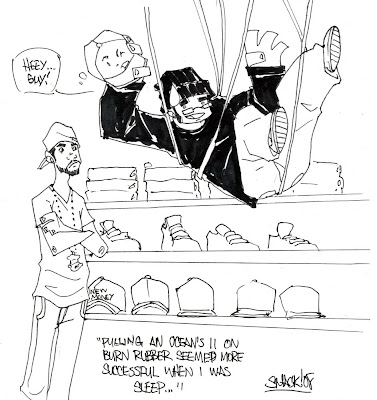 And so the Dailies begin. For three weeks until the 30th (when I head back to College for Creative Studies) I will be doing a sketch a day in the veins of the same thing my boy Chris Houghton did earlier this year. So why not start it off with a bang? And don't worry, any BR representatives. I plan on purchasing the Kid Robot with cold hard cash, son! 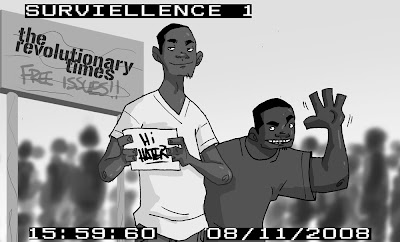 The FBI suspects that the R. Times duo are apart of illegal activity and that this newspaper of theirs is nothing more than terrorist propaganda urging the youths to do terrorist fist jabs all around to destroy this country! So surveillance of the two were started immediately. Unfortunately their sneaking capabilities aren't that...great, apparently...

More promo work for "Revolutionary Times." That's what being done so far. We're gonna let the comics simmer into y'all brain for a while so we can work on some more major work. We're thinking about Powerpoint and video presentations, big connections, etc. I told you before we are trying...no, we are GOING for that major status. Cheah!

xXSpeech Is That Guy's Hammer But He Ain't Thor Though...Xx

The homie Ketchum has been plugging my work on his blog for a while now. So when he was making his move from Blogger to Wordpress, he needed a temporary banner until his "lil' sis," the oh so beautiful Brittany blessed him up proper for some greatness. And dude is really taking this move seriously. The man wrote a song to "Dear Summer" saying his goodbyes to Blogger. Come on now.

So yeah, this week should be interesting to say the least. Let's get these Dailies poppin' off, still working on Trendsettaz and I.V. work (the word "Kick Ass," keep that in mind...), waiting to hear word from Joshua Thompson and DJ Mo Beatz so we can get those projects off the ground, AND trying to get a sixpack for the I.V. Pool Party this Friday! Okay, maybe not a sixpack but at least some pool attire. Either way, I'm looking forward to all of it.

With that, I bid you farewell. Ghost...face

EDIT: Finally updated the Music Player (yeah, like anyone actually listens to it) to include more tracks that get me through this art thing INCLUDING the newly released "Jockin' Jay-Z". I had to. Here's a complete list of the songs in the player...
Hmmm, maybe I'll make a second mixtape now...
Email Post
Labels: dailies