Let's start this one off right...
Smack Chronicles - "Heavy Baggage" (I guess this would be Strip #30. Wow!) 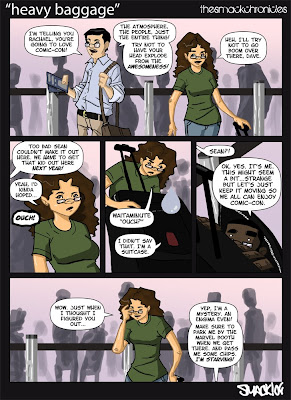 I'm already prepared to hear all about the greatness that was ComicCon from the friends who got a chance to live the experience. The only way I could experience was by watching G4 and the coverage they had. But I already know I missed a LOT! Max Payne? X-Men Origins: Wolverine?! Heroes? Lost?!? Watchmen?!?! And that's just a few of the things. Plus the networking opportunity of a lifetime! It's all good though. ComicCon 2009 better be prepared for my arrival though. That's all I'm gonna say about that.

On the comic tip, as you can see I'm starting to do more "Smack Chronicles" strips now. And don't worry, there will be more "Revolutionary Times"on the way. I'm working on promo pics and Brandon's busy trying to get us in the world of being copyrighted so we can be officially major. Plus I'm still waiting to get an email back from a very interesting person. If good things come out of that particular contact, I'm giving this man a terrorist fist jab. If you haven't done so hit up our Myspace, add us, show some love and support. We'd appreciate it greatly. A Facebook group/fan page is coming soon as well.

xX2D Animation RebirthXx
I love Wall-E. I love Kung Fu Panda. They have proved to be the two best animated features of this year to me. But with that, KFP is a bit higher on the love scale than Wall-E. Now before I get beaned in the forehead with lil' Eve dolls, I say that for this reason and this reason only...

And THAT was the most standout part of the whole movie to me. (that and enemies going blind by pure awesomeness). So I'm telling you this now: TRADITIONAL ANIMATION STILL LIVES. It's not dead yet. I'm not gonna get into a Nasir Jones phase and make banners saying "2D is Dead." Not just yet. More proof you need, you say? Aiight, how about something from the masters of the 2D art?

...and I'm REALLY looking forward to that. Yeah, I said that...in a MANLY way. Why? Because I missed 2D animation in the theater THAT much. Brad Bird's work in The Incredibles was purely amazing but give me what he did with The Iron Giant anyday. And just because this has me pumped up, one more piece of evidence...

...and that's because I just needed some type of Gorillaz fix.
(NOTE: You probably won't be able to see the videos if you're reading this through my Facebook feed. Hit up the original post to watch them in their glory)

That's all I gotta say for now. I need to go and watch Iron Giant now after all that. I haven't forgot about putting up those doodles from the family reunion. I might make a second post today for those.

Until then - Ghost...face.
....and why so serious?
Email Post
Labels: smack chronicles