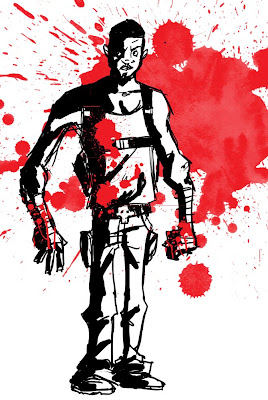 During the ride back home, I did something that I never seem to take time to do anymore - I looked at the world around me and just let my imagination go wild...

Combined with having just watched Point Break & Memento and music playing simultaneously, my brain formed crisp yet gritty animation of a lone man in a battle with his own mind and many many people with guns. A trailer was formed using only the Lil' Wayne driven chorus of "My Life" with quick cuts of gun fights, somber moments in darkness, and a gun to the temple. And a beginning of this unknown story set to the tone of "Freddy's Dead," following a thought-to-be main character and ending abruptly with him getting rammed by a car introducing the actual protagonist. A protagonist who is aware of our own world and breaks the fourth wall repeatedly, much to the glee of the you, the viewer. An almost cold personality mixed with the gritty mentality of say Max Payne or The Punisher with the quick wit of Will Smith (sans the assistance of Martin Lawrence).

Thing is I don't know what any of it means. Could it be a moment of genius I should store in the brain so that I can tap into it in the future and give it justice? Or just another far fetched illusion from me, the daydream junkie. Who even knows? Only time can tell. It's just amazing what your brain can give you when you just let it go crazy...

And now I'm back to watching 1408. I'll post some doodles I did this past weekend during the whole family reunion thing sometime tomorrow. Plus maybe a Comic-Con'd "Smack Chronicles."