A mixtape for a damn blog? I'm starting to think most of my outlandish ideas come to me at 5:30 in the damn morning. This is one of them.

So as I started this week of pure grindin' like those two brothers from VA, I was hit with an idea Monday morning I believe. Since I spent most of the night finishing the two pieces later in this post I thought to myself, "Self, you should make a banner for the blog." Quite inspired from a girl that spits fire's page I got to work on it immediately. That was at 3 am. It was a 5:30 that I looked at the design and once again said, "Self, damn you could make an album cover out that. Haha..."

So with the next hour or so I started compiling up songs and movie quotes, the same songs and movies that have helped me get through every sketch to the final product lately. Well the movies more so help me visuals but still. And that is why I have a mixtape for a damn blog. 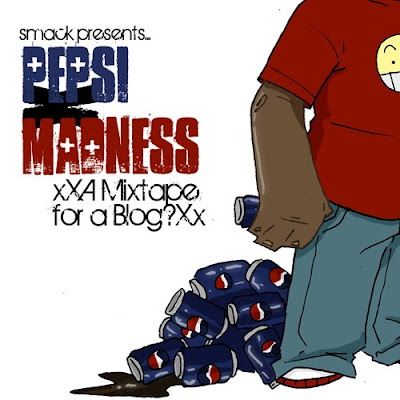 Available for download if it interests you. If it doesn't work then bare with me. I'm new to this lol.
http://rapidshare.com/files/128291511/SilentSmack_-_Pepsi_Madness__A_Mixtape_for_a_Blog_.rar.html

And with that, "Grindin'" week continues. Calling up several people to see possible places where me and Brandon can distrubute "Revolutionary Times," and emailing some of the webcomic gods (Penny-Arcade, PvP, etc) who happen to have distrubtion deals themselves to see how they're process was in doing so. Also apparently I might be heading out to the D this weekend (and making a stop to Flint to pick up my damn I.V. shirt finally) for the Royce Da 5'9'xD12 concert (probably a very Eminem-less D12 at that...). That's only if a certain cat with connections can work some magic that won't have me paying too much for it. (Hey, you point me out on your blog so I do the same lol).

Also finishing up some commissions. These were two pieces done for a friend of a friend (Props to Delo for putting in a good word for me). 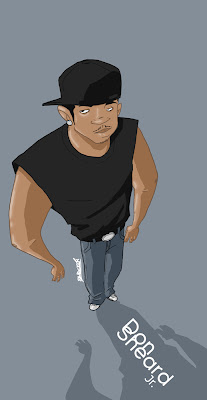 You TOO can be a character. I'm starting these character commissions for $50/$25 each for multiple ones. If you're interested in one just hit me up by email (silentsmack@yahoo.com).

Now with all that said, I'm bout to get a lil' workout in before heading out to the art museum for that good ol' nonpaying volunteer work. Fun times. So fun times...