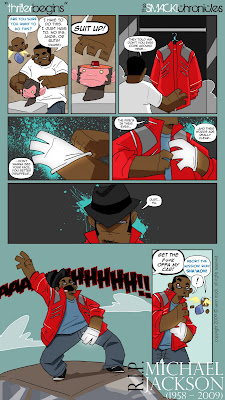 In the words of James, owner of DSE@Grand, "There are things you expect in this world. You expect the sun to rise and fall. And you expect Michael Jackson to be here." That's what I expected. Dude was a legend who brought us timeless music, despite all the media bullshit he had to deal with. To hear that he's no longer among us is just...weird. I remember how I was feeling when I heard he was in the hospital, watching CNN waiting to hear what was going on. And when they said he had passed, I didn't even know how to feel.

I didn't know this man personally but his music was one of the highlights of my childhood. Brandon (co-creator of "The Revolutionary Times") were just talking about how we used to jam to his album back in the day. "Thriller" and "Rock With You" will forever stay one of my all time favorite songs along with a slew of others. To say the man will be missed is the understatement of the century. To say the man will live on through his music though? Truth.com. Rest in peace, Mike.

(and yes, there is a Batman Begins and How I Met Your Mother reference in there as well)

And best believe Brandon is cooking up a tribute for Revolutionary Times as well. And I'm also working on an actual tribute piece as well.