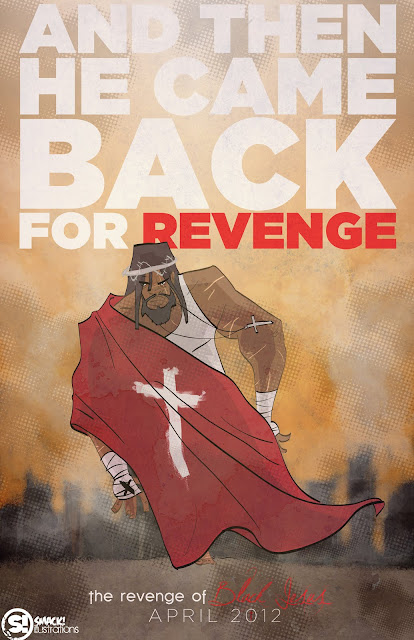 So early Easter morning as I stood in a hot Southern church listening to my little cousins give off their Easter speeches, my mind started to wander like it does during any church service. First it went to the aspect of "Black Jesus" and "White Jesus," which I never delve too deep in. Then it when toward the realm of "Jesus vs. The Easter Bunny" seeing as how the holiday is either one-sided, populated by the popularity of the rabbit or the celebration of resurrection. And then I thought, man. Religious subjects has tackled in so many comics (The one that ALWAYS stands out will forever be Preacher), but I would love to put my own spin to it. Insert "The Revenge Of Black Jesus."

I swear to you on that entire day I've created a complete concept for this tale of revenge and religious hitman-ery. The basis is that of a loner bum named "Black Jesus" who is mysteriously brought back to life by agents of Heaven to take out a gang of thugs and their drug lord leader aptly named "The Easter Bunny" before they take over the city with violence and corruption. The same gang that brought bum Black Jesus to his death merely three days before. It would be like The Crow except less goth-y and more Jesus-y.

So there you have it. I don't know if this will ever come back as an actual graphic novel. Maybe I'll link up with Brandon and we can do it as a Revolutionary Times imprint or maybe I'll do it by my lonesome. All I know is that I'm getting the idea copyrighted SOON because if I see ONE person with the same idea I'm bashing skulls in the name of science.
Email Post
Labels: bored smack randomness