So I keep forgetting to update this thing regularly. I've just been going through some things that have hindered that idea. Aside through pitfalls, heatstrokes in a hellish apartment, and epic fails I still have some type of hope. Don't worry though, I haven't forgotten about you, blog. You're my only friend...
xXHeartbreaks x HeartsXx 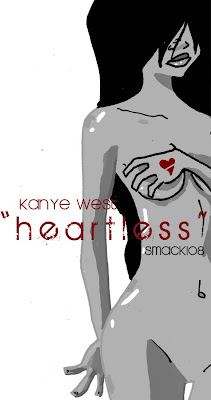 This is the first piece of a series that I'm thinking of starting that are based on certain songs that frequently pop up on my iPod. At the moment it's called "Hear With You Eyes" but it's a tentative title. The first piece is based on Kanye West's "Heartless." 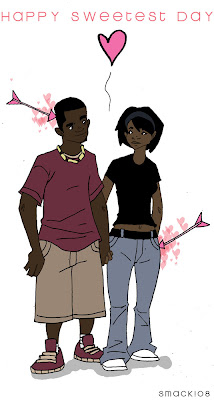 Going from heartless to heartful, this is something I did for my homie John and his girl for Sweetest Day. Hey, if I can't have someone on trivial days such as that then I guess I can help out others, right? 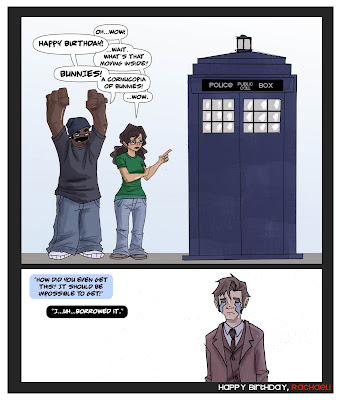 And this lil' diddy was a birthday gift for Rachael who LOVES her some Doctor Who. Lookin' back, I see that I'm always Danny Ocean when it comes to people's birthday comics. Why do you suppose that is? It's certainly not to uphold some type of stereotype that's for...ahem...
....although I did go up to some little kid with a sucker and yelled "Break yo'self, fool!" Loudly. Huh.
Anyways, I also went up and beefed the playlist up some more with some new songs. Awesome. Pure and unadulterated awesome is what is. Here are the new tracks:
Annnd that's about. Oh and kids, here's a tip for the day: Don't accidently go to sleep in a hoodie while your apartment's air conditioner is somehow spilling out hot lava for air. That could cause you to wake up and immediately feel like dying. So yeah, don't do that. For me. Please? Coool.
As always, I'm Ghost...face
Email Post
Labels: art of noise hear what your eyes can see