Last Saturday Identical Variant held its first in what would hopefully be a series of hip-hop showcase, The Art Of Hip-Hop. The show went dope. It featured artists suc as Morale Music's Domino, Swinn, Fellow of Eagle Ave., Nug, B!Z and others.


The actual FIRST incarnation of this show came in the form of "Hip-Hop: The Lost Art," a similar show that was held at Randall (one of the IV owners) and I's campus, College For Creative Studies. At that show, I did live art while the artist performed their sets so you actually GOT art and hip-hop in the same spectrum. . So it was my bright idea to do it again.

Except yesterday's event wasn't just college students. Apparently it was the whole city of Flint. When you say one can sweat bullets under pressure, I'll tell you that my cap was filled with military grade tank bullets. But overall, it worked out. People loved what I was doing and I ran out of business cards (hopefully that's a good thing).

Currently, I'm trying to find some way to get prints made and make them sellable through the IV site. But for right now if you want a 18x24 print, go ahead and purchase at my DeviantArt page. It's only $24.99 plus tax/shipping. 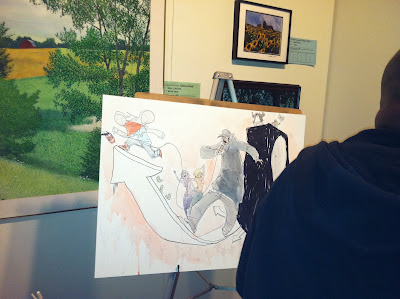