The Reveal Of The Black Comix Book - A Picture Rendition 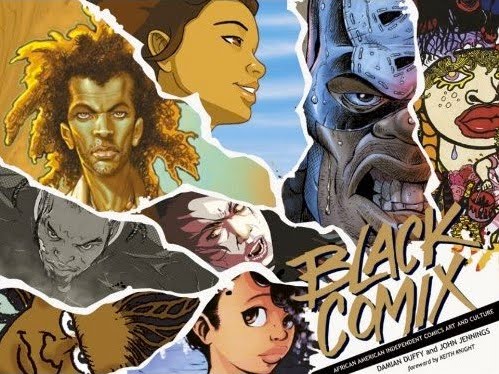 So a while back, like long long time ago in a galaxy far away, I met up with comic creator John Jennings at a lecture he was having in Flint about black artist in comics (What up Zo!). After the lecture, I got a chance to chop it up with him and even show him my portfolio. So I thought that was that. I mean I'm still in college (at the time) there ain't no way I'm bout to get a big chance.

Low and behold, some time later I get approached by him in a project. A project that would round up a stable of truly talented individuals in comics who just so happen to be African-American. Just imagine a new Justice League/Avengers type squad led by Luke Cage and John Stewert (The Black Green Lantern) and you'd picture this incredible list of artists. So of course why wouldn't I take up the chance? So I offer some artwork and bio and let John and Damian Duffy do their magic...

...A year and some change later, I get ring at the doorbell and a mysterious package has been left at my doorstep. I now bring you into the journey of opening that said package through the majesty of pictures!
So all in all the Black Comix book came out dope. If you want to check out some amazing comic work from the urban side of things mixed with in-depth articles on the history of the artform then this book is the one for you.
...and I'm not just saying that because it has me (and The Revolutionary Times) in it. Honestly. Scout's honor. And it counts because my dad was a boy scout. Shapow.
Learn more about John Jennings, Damian Duffy, and the Black Comix by checking out the official website and the official Twitter  AND Facebook pages as well!
SIDENOTE: Another project that me and John have been developing is a 16 page horror comic. Just thought I'd put that out there. Ya know...just in case a year from now you see me say "Hey, remember that sidenote I talked about"...
Email Post