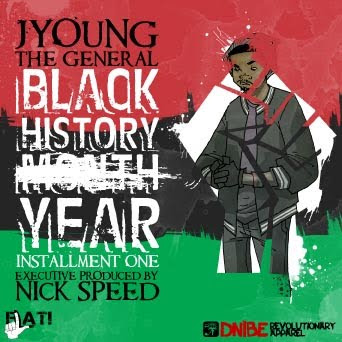 Why yes, I DID design the cover!

Two night before the release of his new EP (executive produced by Nick Speed) the homie JYoung The General hit me up (well, the best friend/his manager Ketchum did on his behalf) to design the cover for the project. I wanted to reflect the feel of the music so the inclusion of the black power fist and painterly brush stroked Pan-African flag colors. As for the music itself, well I'll let J's nice write-up explain that to you...

Black History Month has ended, but why not have a continuous celebration, even beyond February? A Detroit emcee and Michigan State University journalism graduate, Jahshua “JYoung The General” Smith has spearheaded Black History Year –a series of songs aimed at educating black history in a contemporary, but yet entertaining approach throughout the entire year. JYoung teams up with hip-hop music producer, Nick Speed and clothing line and sponsor, Dangerous Negro Apparel, to promote black history in sets of 365 days instead of 28. Today, JYoung releases the first installment of Black History Year.

"I've been studying black history since I was a teenager, and I know firsthand that there's more than enough information for just 28 days,” said JYoung. “With Black History Year, I want to educate and entertain for twelve months - and hopefully, even more than that.”

JYoung has researched black history since he was a high school student, and he counsels children that have been to jail and prison. After seeing how well many people of all ages respond to music more readily than they do to books or class lectures, he decided to record music that would educate while entertaining at the same time. He approached fellow Detroiter Nick Speed—platinum-certified producer for G-Unit, Talib Kweli and others—and they recorded songs throughout February.

The result is Black History Year, named after a t-shirt campaign by Florida-based clothing line Dangerous Negro Apparel. The first installation begins with “The Meeting (Malcolm Vs. Martin),” a song with Lansing emcee James “P.H.I.L.T.H.Y.” Gardin simulates a face-to-face conversation between black history’s two most storied leaders over a dusty, percussive soundbed. What follows are songs about Kenneth Clark’s “doll study” that investigated self-hate and promoted desegregation, odes to black comedians and the jazzy speakeasies of the 1920s, and poet Phillis Wheatley. The EP ends with “Haitian Fight Song 2010.” The empowering anthem uses a gripping mix of chants, pianos, guitar plucks and poignant lyrics to tell the story of Haiti’s struggle for independence and continued perseverance through tough times.