Cold Men Young - Champagne Nights/Red Stripe Budget DP
I've been designing a few album/mixtape covers since I graduated, and this one of the first projects (the first being the Detroit CYDI joint). Come April, the group known for their BARS! is getting ready to release their project (or DP "Digital Play" as they refer to it) Champagne Nights/Red Stripe Budget out for the people. And since they are IV approved, they hit me up a couple months back to see if I wanted to design a cover for them. I'm a fan so of course the answer was yes. So since Mic Write, the "Luda" of the group (HA!) dropped the cover this week I decided it was good to go on the blog as well... 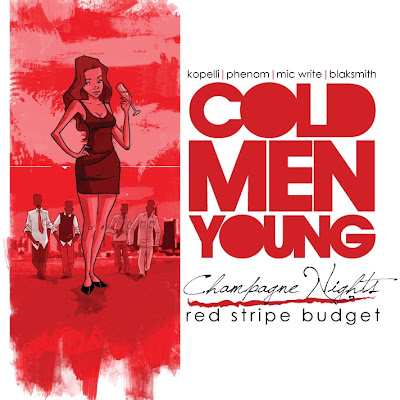 The album is expected to drop on April 1st, and no that's no joke. Well, if BARS! is jokes then this about to be the "In Living Color" of Detroit hip-hop. (Ha, I made a funny).

Also, the crew JUST released their "Jackin' for Beats" mode version of the Gorillaz single "Stylo" entitled "Off My Chest" that you can take a listen to here:

Re:Definition - Searching For The Perfect Beat 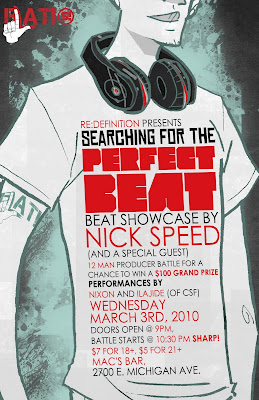 Along with the music tip, here's the flyer I designed for this month's Re:Definition show in East Lansing. The show, happening this Wednesday, is headlined by producer Nick Speed (G-Unit, Danny Brown, etc) and involves a 12-Man beat battle where the winner of it all gets a very nice cash prize. So if you're out in the East Lansing area, put the red cup down and head out to Mac's Bar and get some good music in your veins.

...and then AFTERWARDS you can get your red cup back and party over at MSU. I would do it...if I had a red cup handy.
Email Post
Labels: commissions music showin love