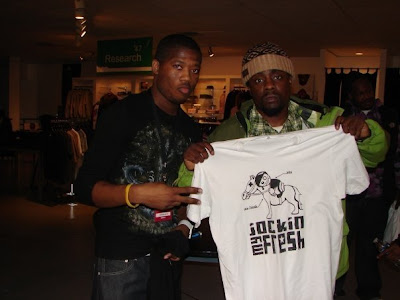 So apparently I.V.'s newest recruit Terrence is living the code of Kevin Liles and really "making it happen." He had a chance meeting with DC emcee Wale ("Nike Boots," A Mixtape About Nothing, "Rising Up" off of The Roots' Rising Down, etc) while he was doing a show in Tennessee and promptly let the dude know all about I.V. Word is he even rocked a "I Come In Piece" shirt during his show (pics soon to come). Now some of y'all already know I've grown to become a big fan of this cat's music so this is mad crazy to me. Shouts out to Wale for the support and to Terrence for stepping the damn game up. I feel like I gotta get Jay to rock a shirt now to even compete!

And remember, YOU TOO can cop your own I.V. shirts @ http://identicalvariant.bigcartel.com/
Ghost...face
Email Post