So technically I'm not SUPPOSED to be doing this due to a pact that I would stay off the internet in order to further progression in both art, life, and love (you know, all the Facebooks and the Myspaces), but I can't leave now, the blog game needs me. It's a business, man! Randall should understand that. But I will admit I have been a HELL OF A LOT more productive since I taken this internet break. So productive that, hey, it's a new Revolutionary Times strip! 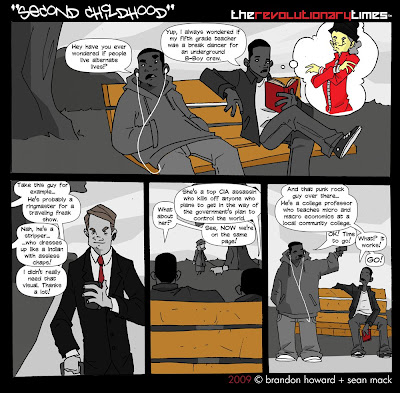 Told you we were still stirring up something in the pot, slowly but surely. Brandon and I are also about to distribute what we like to call, "inspirational postcards" out to you, the people in hopes to keep your head up during such stressful times. Learn more about it at the R. Times blog!

And as promised, here's the second tribute portrait for the Dilla/Ghostface Xperiment. Who's gonna be the next one? It's really in the air right now but some candidates have been thrown around (T.I., Wayne, Little Brother, Royce Da 5'9, or A Tribe Called Quest) so we'll see in the future... 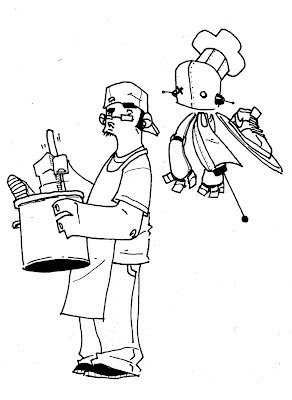 So around December (I think, bad memory), Cliff Skighwalker, fellow big guy blogger and Burn Rubber representative hit me up on Facebook wondering if I wanted to participate in the Artist Series that BR is starting up. Since I was steadily becoming a fan of their shop I of course said, "yeah." But because of school and some freelance work I couldn't get to work on it right away. But after MANY MANY thumbnails/sketches/late night head banging I finally came up with a simple design. Expect the final version to be completed and up on here soon enough!

xTidbitsx
- In the midst of working out designs for the website. Should I make it all crazy insane/insane crazy or dumbed down for a large audience?
- Head over to the I.V. blog to check out more of the Wale photos including his performance while rocking the "I Come In Piece" joint.
- I MIGHT be making a book. Originally it's supposed to be my portfolio that I'm sending out to companies for an internship this summer but if I can get it for sale too then that would be a very good look. Who knows? If it works out like I think it will, you will definitely be hearing more about it in the future. Hell, collections of Smack Chronicles and Revolutionary Times could be coming up as well! We'll see...

Aight, I think that should be enough for now. Despite the anti-internet project I will be keeping this mug updated when I can. Until then, and as always, I'm Ghost...face
Email Post