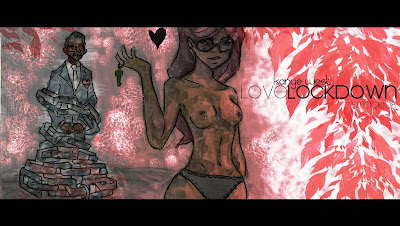 Another addition to the "Hear What Your Eyes Can See" series. This one also based on a Kanye West produced song, "Love Lockdown" off of his recently released album 808s & Heartbreak, which is surprisingly a decent album albeit it's incredible difference from his past albums. I advice everyone to take a listen to it even if you aren't a fan of Hip-Hop, R&B, or the such.

For this one, I did some experimenting mixing both traditional and digital (or as Don Kilpatrick calls it, "tradigital"). First I did the initial piece in watercolor on canvas paper and then I scanned it and did some tweaks and additions in Photoshop, and finally adding the letters in Illustrator. It was good experience and I just might try it out again when I get the chance.

So stay tuned, true believers (that's right, I used that phrase again. Sue me!), and as always I'm Ghost...face
Email Post
Labels: art of noise hear what your eyes can see