Smack-Inspirations | Jake One x Freeway - The Stimulus Package (Album Cover) (designed by Brent Rollins)
The name "Brent Rollins" has be synonymous with "design" and "urban culture." From designing the logo for Boyz N The Hood to his various work with Ego Trip, people know the mark of Rollins. So it doesn't come as a surprise how extremely dope the CD packaging that he design for Beard Club For Men affiliate Freeway and White Van enthusiast Jake One's upcoming joint project. Just from the video, you can tell that the level of detail is incredibly lavish - from the large bill graced with Jake's and Free's faces to the worn out wallet with credit cards included. No pun intended, this is a complete package. If the music doesn't make you buy the album in its physical form than hopefully the presentation will!
RE:Definition - Feb. 3 - East Lansing
Speaking of music, February is on its way so for East Lansing that means another RE:Definition show is in the works. This show headlined by its female crooner Yellokake. BLAT! Pack frontman JYoung the General hit me up with a unique idea to base the flier design of a jazz poster featuring one of Yellokake's favorite singers, Sarah Vaughn. So as an influence and a homage, the flier puts Yellokake in Vaughn's place. I wanted to make sure that I put my own spin to the design while at the same time using the poster as an inspiration. And here is the final result: 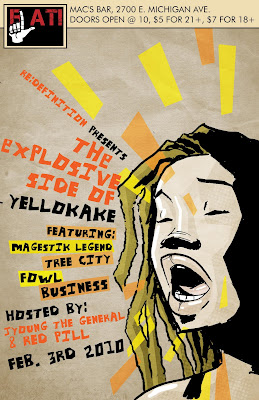 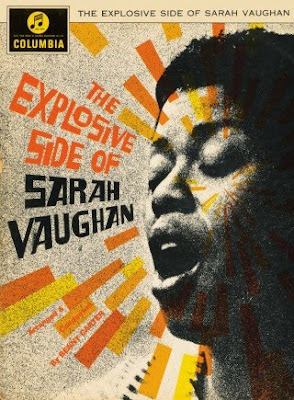 ...and by the looks of it, you might be seeing more RE:Definition fliers to coming from me every month if the goal is presented to me. Who knows, true believer. Who knows...
The NEW Improved SoundSmack!
Oh yeah, and for those who are interested in the music that actually helps me focus on drawing - here's the new tracklist for the playlist:
Email Post
Labels: commissions inspirations music videos

Nikki DeSautelle said…
That old jazz poster is SWEET. I also really like your interpretation.
January 27, 2010 at 12:15 AM