So last night was the iV show featuring talented peoples such as Cold Men Young, Jon Connor, Swinn, JYoung The General, and Sheefy Mcfly. Actually those were all that performed but they all equally shut it down (even killed some of the mics). But as the show was called "Hip-Hop: The Lost Art" I decided to draw up a mural in celebration of the "art" side. This was something very different from what I normally do. I'm all for digital but setting up something from scratch especially in the way I had envision was a tough one. Also it was first foray into making a stencil so a lot of work was put into it. 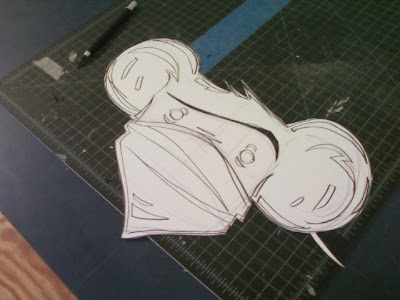 The now "infamous" mouse stencil as it was being created... 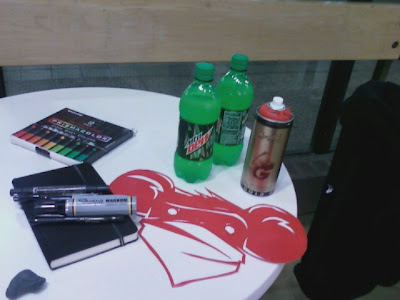 Mi tools along with the "Dave Chow All Nighter" Starter Kit complete with a double dosage of Mnt. Dew. 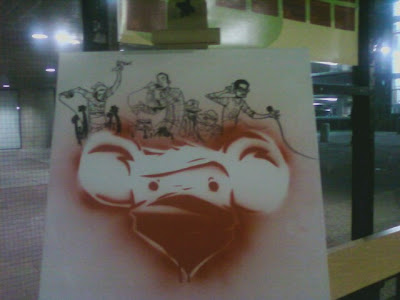 And this is how it looked after the first three acts did their thing on stage...
So after all the back breaking canvas drawing, I took it all in Photoshop (scanning something that large without a large scanner sucks), and did some touch ups and added my whole "Smack Loves Digital"ness to it. And here, ladies and gentlemen is the final result. 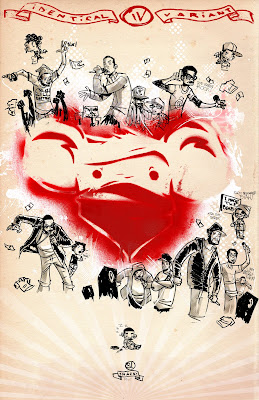 Top (left to right): Kirby Hairston, JYoung The General, Swinn, the cat with the Burn Rubber hat whose name is missing my mind, Young Stunna, Sheefy McFly, Randall Pointer
Bottom (l to r): Jon Connor, Cold Men Young (Phenom, Blaksmith, Kopelli, Mic Write), Jay Norm (with the sign)
And of course, a very tired chibi me and very bottom.
Why yes. That JUST happened. Take that, take that!
As far as its future, prints (MIGHT) be made for people to own sometime in the future so I'll keep you posted. And now...I sleep.
I'm Ghost...face
Email Post
Labels: identical variant music randomness showin love