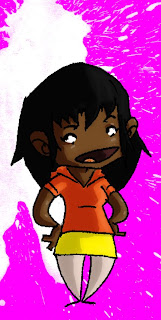 I present to you the 2008 version of "Release Therapy," a concept I started at the end of my Sophomore semester that consist of pieces I did to get through the stress of finals. The first version basically had scribbles and sketches done digitally that had a range of basic portraits to concept ones (Smack in 300 anyone?) So for this year since everybody and their mama at CCS had been asking for drawings of them why not do as a "Release Therapy" joint? So here we are. And don't worry, I'm working on another batch of these for other people as soon as I get done with some "Revolutionary Times" joitns and along with trying to get another "Chronicles" comic out as well. I'm trying not to forget anyone. Promise!