Well, the artistic dry spell is almost over (thank you "VenomSmack") but I'm seeking new a opportunity, mainly those dealing with a more..."animated' approach to things. Yes, after constantly watching more animation (The Iron Giant is still THAT deal) nowadays I've become intrigued to convert my works into animation. This and constant pleas to do so by one of the heads who run the Illustration department at CCS have put the thought of doing so in my brain.

But how can I do this? I can select Animation as my minor until I head back to CCS and that's not until August, and 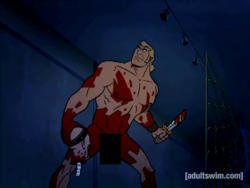 my impatient self wants to get it cracking right now. So my first step is looking into doing a little something on Flash for now. But that's another thing: I only did a few things in flash like the (deceased) website (damn, I miss that masterpiece) and...yeah that's about it. So as you can see I'm feeling like a n00b playing his first ever round of Halo (and I should know that...since I've never played Halo). So you can see my current dilemma. I think I shall focus more of this current goal since getting a job is basically not happening (f**k you Saginaw jobs. F**k you up your stupid tails).

Right now, I'm just trying to find any good books on Flash animation and in animation in general. If I was back at CCS I know there would be a truckload waiting for me in the library but since I'm not I need to improvise. If anybody out there knows of any books that I might want to look into feel free to put your two cents in. But until then, I will continue to look at The Iron Giant, Venture Bros., and Bebe's Kids in awe. Adios.